Fabian Bechtle, born 1980 in Berlin. Studied fine arts at the Academy of Visual Arts in Leipzig (HGB) and at the ENSBA Lyon. From 2014 to the end of 2017 artistic collaborator in the class for installation and space at the Leipzig Academy of Fine Arts (HGB). Since 2018 co-director of the Forum Democratic Culture and Contemporary Art. Exhibitions at HMKV (Dortmund), Witte de With Center for Contemporary Art (Rotterdam), Trekhgornaya Manufaktura (Moscow), Museum of Yugoslav History (Belgrade), Fabbrica del Vapore (Milan), nGbK (Berlin) and Bonner Kunstverein, among others.

Leon Kahane, born 1985 in Berlin. From 2010-2016 studied fine arts at the Berlin University of the Arts and the Bezalel Academy of Arts in Tel Aviv. In 2016, winner of the "Kunstpreis Europas Zukunft" and the ars viva young artist award. Since 2018 co-director of the Forum Democratic Culture and Contemporary Art. Exhibitions shown at Witte de With Center for Contemporary Art, Rotterdam; nbk, Berlin; Moscow Biennale; Kunsthalle Wien; Belvedere 21, Vienna, among others.

„Unfold The Banners Release The Balloons“

Official celebrations and diverse protests overlapped in the European Parliament in Strasbourg in 2005, when a treaty on a constitution for Europe was adopted. The scene is as divergent and complex as the debates leading up to it, which pitted, for example, European interests against particularistic national ones. Bechtle / Kahane transfer these ambivalences into their work: "Unfold The Banners Release The Balloons". This call can not only introduce a ceremonial act, but also mean protest. The text is printed on a number of white balloons that lie loosely distributed on the floor in the exhibition space, and which in their loose gathering become a crowd. In the breeze of the passing visitors they move easily, collisions are not excluded. 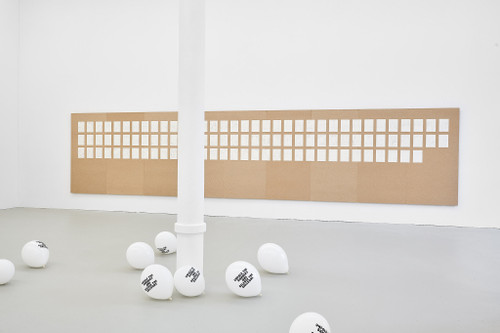 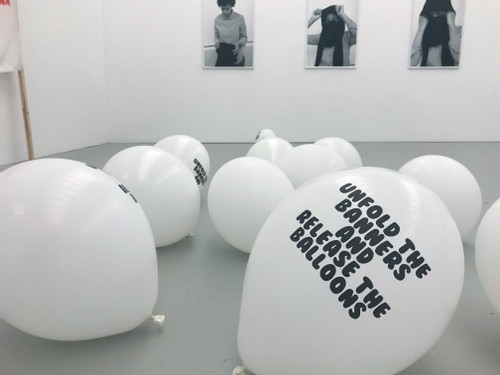 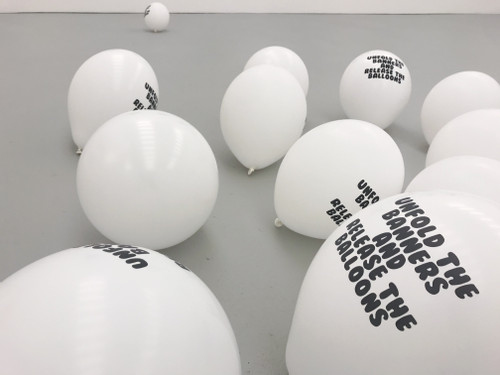