Galerie Jocelyn Wolff is pleased to announce its new collaboration with Irene Kopelman.
Born in Córdoba, Argentina in 1974, she studied at Facultad de Artes, Universidad Nacional de Córdoba, then at the Rijksakademie van Beeldende Kunsten in Amsterdam (NL). She gaduated a Doctorate in Fine Arts, in collaboration with Utrecht Graduate School of Visual Art and Design (NL) and Kuvataideakatemia (The Finnish Academy of Fine Arts) (FI). She lives and works in Amsterdam.
Irene Kopelman explores the links between the natural sciences and artistic practice, which have in common certain research issues and questions of transmission of an understanding of the world. Since 2005, she has been associated with scientific programmes. The residencies that she carries out in collaboration with scientific researches enable her to implement her own research subjects and work protocols.  She had major exhibitions in several institutions such as La Verrière, Fondation d’Entrerprise Hermès, in Brussels, at CRAC Alsace, Altkirch, at MALBA in Buenos Aires, at Witte de With in Rotterdam, at MAMAC, Nice, and at Museo Emilio Caraffa, Córdoba.
This exhibition is the beginning of a regular collaboration with the Jocelyn Wolff gallery, and includes different projects, the most recent of which is drawn from her current residency that she is carrying out in the Alpes-Maritimes, where she is studying marin organisms. This residency is conducted at the Institute for Research on Cancer and Ageing in Nice (IRCAN) – Université Côte d’Azur, CNRS, INSERM; Villefranche-sur-mer Developmental Biology Laboratory (LBDV) from the Institut de la mer, Villefranche-sur-Mer (IMEV), Sorbonne University, CNRS ; with the support of Université Côte d’Azur and with the inva- luable assistance of d’Eric Röttinger (IRCAN) and Stefano Tiozzo (LBDV). This residency is a long term collaboration with MAMAC (Musée d’Art Moderne et d’Art Contemporain de Nice).

At the end of February, like everyone, I listened to the recording of the wind blowing on Mars. This strange gust of wind, captured by the robot Perseverance, is the first sound ever recorded on the planet. At exactly the same time, I disco- vered the project that Irene Kopelman devoted to the colour yellow: On Yellows, begun in 2018. In Argentina, thanks to a network of scientists, she identified a “chromatically favourable” site in Famatina, in the province of La Rioja, which reunites different factors: micro-organisms that react to the heat (“thermophiles”), variations of iron oxide and certain properties of sandstone. In the text that accompanies the published version of the project, Irene remarked that because of these unheard-of colour nuances, some of these landscapes are often compared to Mars, since they help to unders- tand the ancient bacterial life on the planet. In 2018, she organised two trips to Famatina, where she collected, recorded, observed, photographed and drew. As she wrote, a site allows her to build up a “toolbox” which will have a role to play later, when she goes back to the studio.

Hearing the wind blow on Mars produces a strange effect that shakes up our toolboxes – the ones that each and every one of us builds up to decrypt and understand the world around us. I wonder whether the wind was blowing in Argentina when Irene went there to observe the yellow colour that fascinates her, and if so, how she would have recorded it. I was struck by a discussion that I heard around the same time on the radio with the Australian environmental philosopher Glenn Albrecht. In his latest book, Earth Emotions: New Words for a New World, he worked on inventing words capable of describing the new emotions inspired by our relationship to the world and to living things. Lots of negative emotions (but not only): concern, distress – the failures and ravages perpetrated against the ecosystems affect us more than we know. He calls it “eco-anxiety”, a concern linked to a changing and uncertain environment: “Eco-anxiety affects people who still worry about the ‘state of the environment”. “Eco-paralysis”, on the other hand, is “the logical reaction in the face of the scale of the problem, in the face of the dilemmas, in the face of the helplessness to resolve them through personal action”.

I do not know exactly what the catalyst for Irene’s journeys is. I know that once she is on site, one action seems unchan- ging: she draws. Argentina, Panama, India, Malaysia: everywhere, her hand follows her gaze and hence the contours of the leaves, trees, pigments, mangroves, forests, glaciers or plankton reach back to me. Because I will never hear the wind blowing on Mars “in real life”, because I will never be able to observe plankton properly, her approach dissolves, in part, what Albrecht would call my eco-anxiety. We exchange emails in the week leading up to the exhibition. My mes- sages no doubt betray these reflections. I am embarrassed because my questions are as vast as continents. How to explore the subject? Several “hmmms” punctuate Irene’s responses – a way of thinking out loud, of giving herself time, perhaps also to think her way through the vastness that I am presenting to her and which is, of course, unsolvable. For example, she writes about the setting up of her exhibition: “We will be taking lots of decisions on site”. I ask her what she means by this word, “site”, and whether the upcoming exhibition, which brings together so many sites, journeys, and missions, is like a new site, a new landscape. “Hmmm”, she says. Yes, the exhibition fixes, stabilises something from her expeditions. But then the pieces reintegrate a flux, a flow – their life. I ask her whether she too is sometimes anxious. She tells me that in 2010, during a project in Antarctica, she understood that she was looking at something – a landscape – that was on the verge of disappearing. But she tells me that she tries to leave the anxiety aside, behind, in the background, because what is important is this agency conferred by her exchanges with teams, guides, geologists, biologists – the people who make her work possible and who appease her own anxieties, in a way. Hence a kind of mesh, a network, a system of transmission, operates at a low level and offers reassurance.
These virtuous, exhilarating circles should be celebrated.
I think of the texts of the Scottish essayist and poet Kathleen Jamie, another explorer who also attributes words to the ways in which the natural world, when observed with dignity, continues to delight us:
“So you’ve really gone and done it this time you are lost in the wood how did that happen? The crazed Scots pines cam- ped all around and blaeberries beneath and bracken shrivelled because it’s October and you stand hearing nothing, the non-sound of one leaf dropping to join its siblings on the ground.
You stand still. Behind each tree, more trees. Above: glimpses of bone-white sky.
And now there is a moth. She appears fluttering in front of you. If this was a fairy tale she might want you to follow her, but she passes and will flatten her grey wings against the grey trunk of a tree. She has never been seen before and never will again, that was it – her sole appearance in our human world, and now it’s done”. Irene Kopelman
58 Colours of a Yellow-looking Landscape Ladera Frontal A, 2019-2020 Irene Kopelman
58 Colours of a Yellow-looking Landscape Ladera Opuesta A, 2019-2020 Irene Kopelman
58 Colours of a Yellow-looking Landscape Ladera Opuesta B, 2019-2020 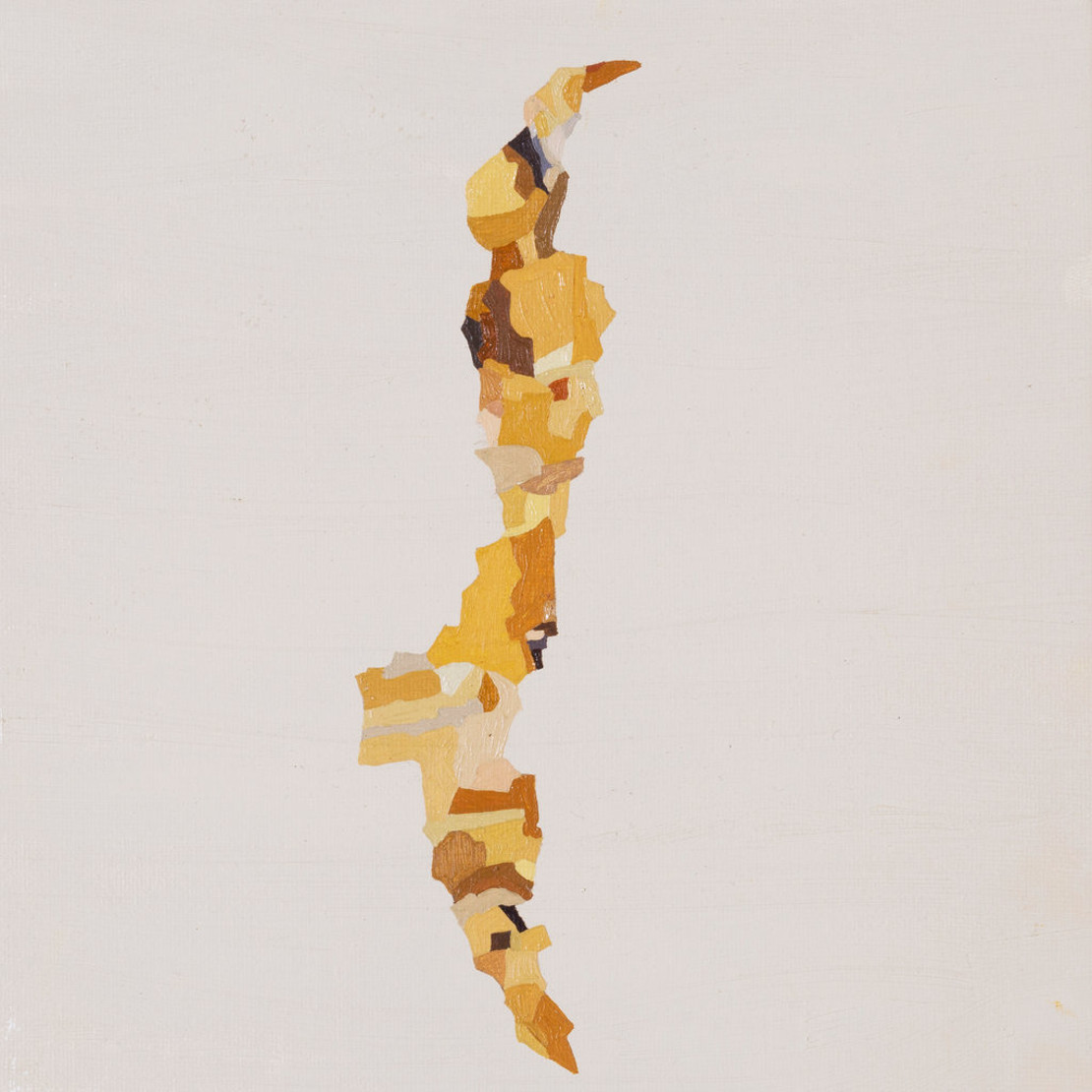 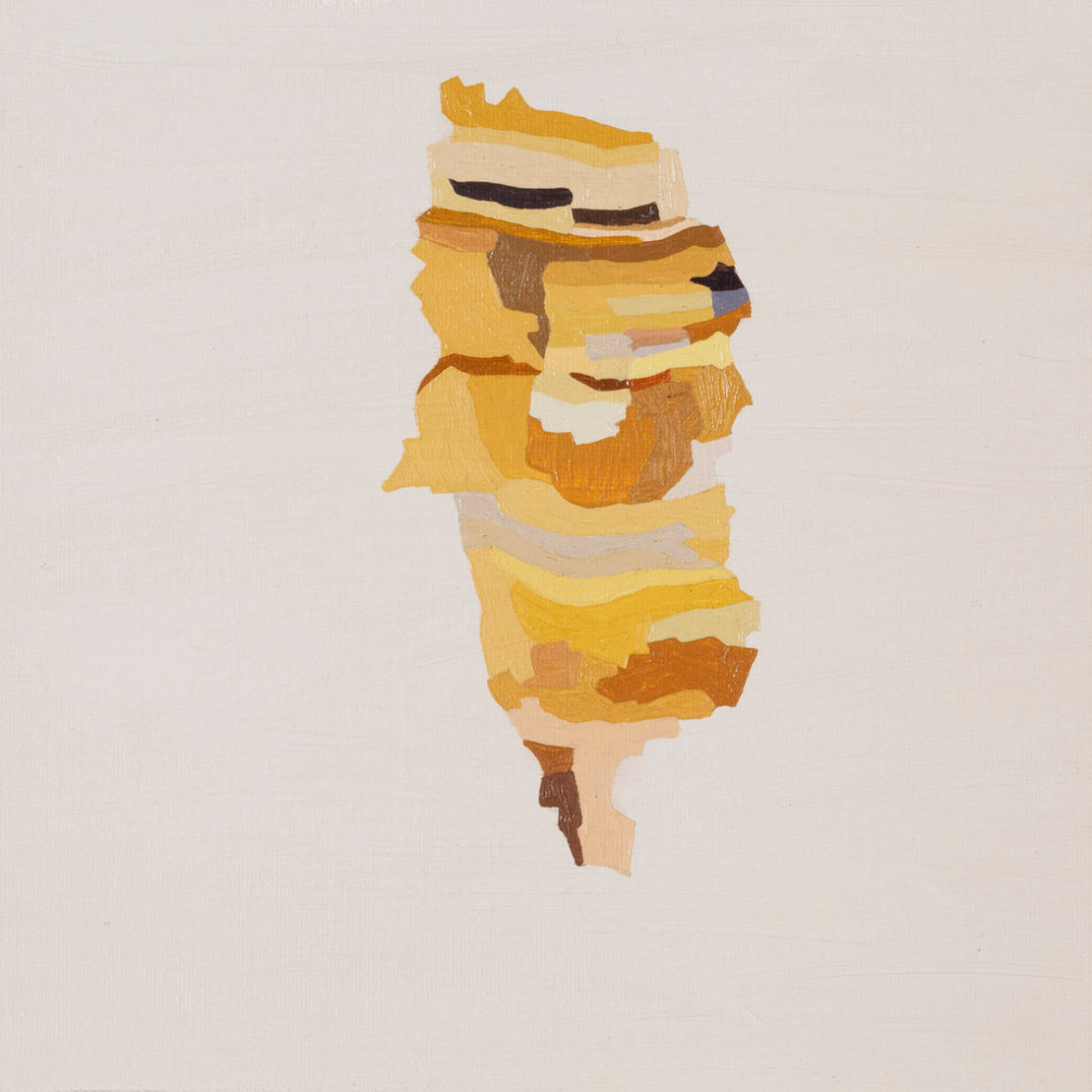 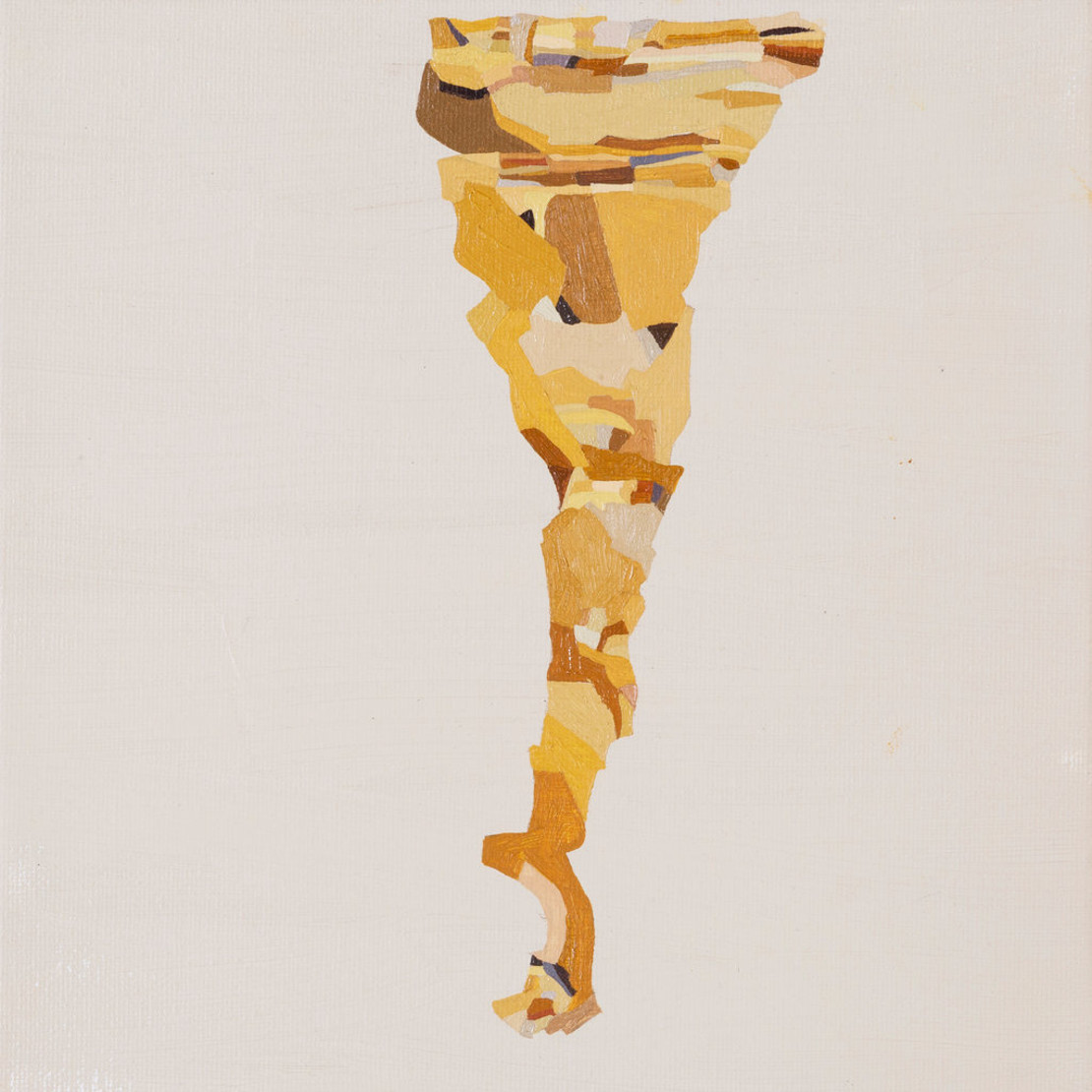 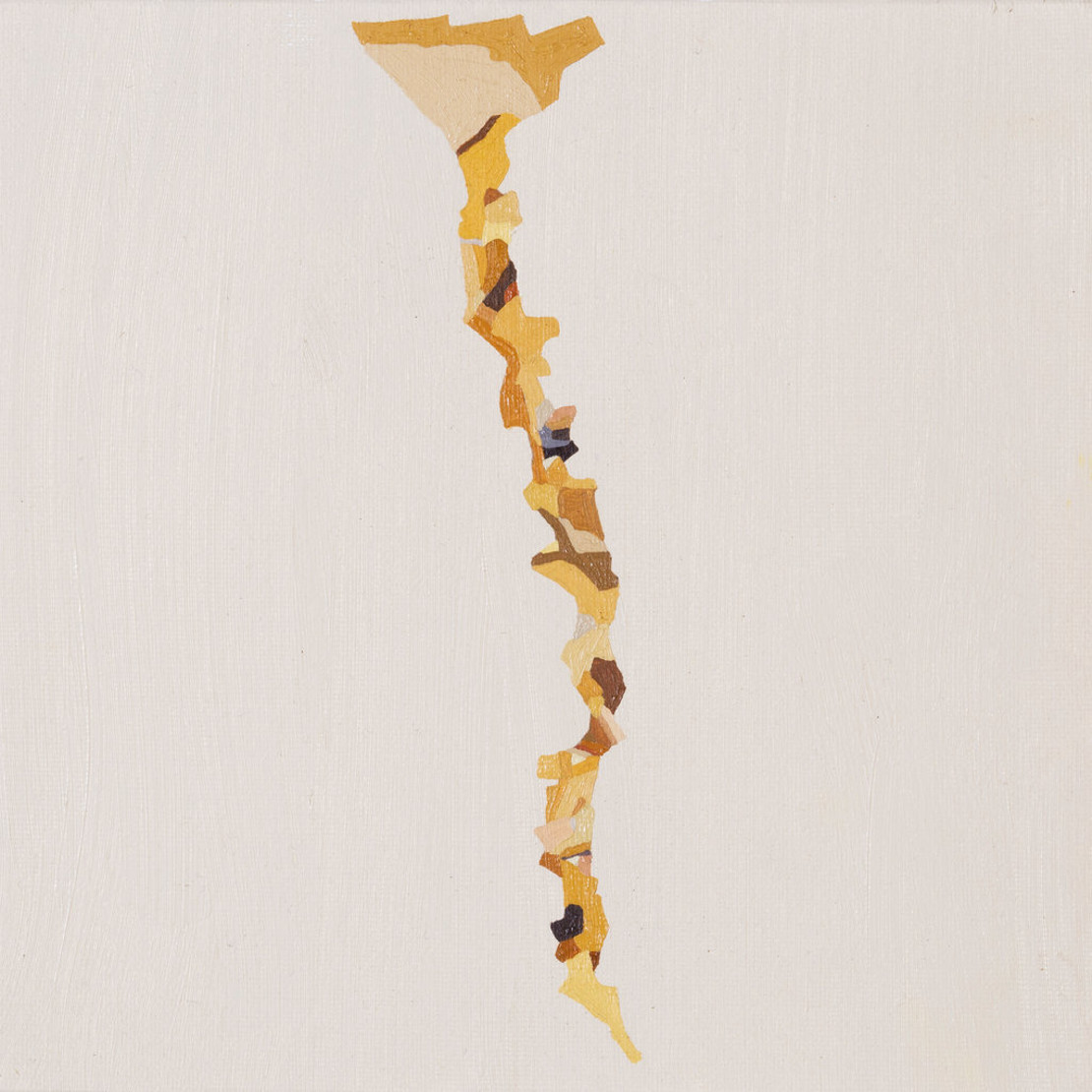 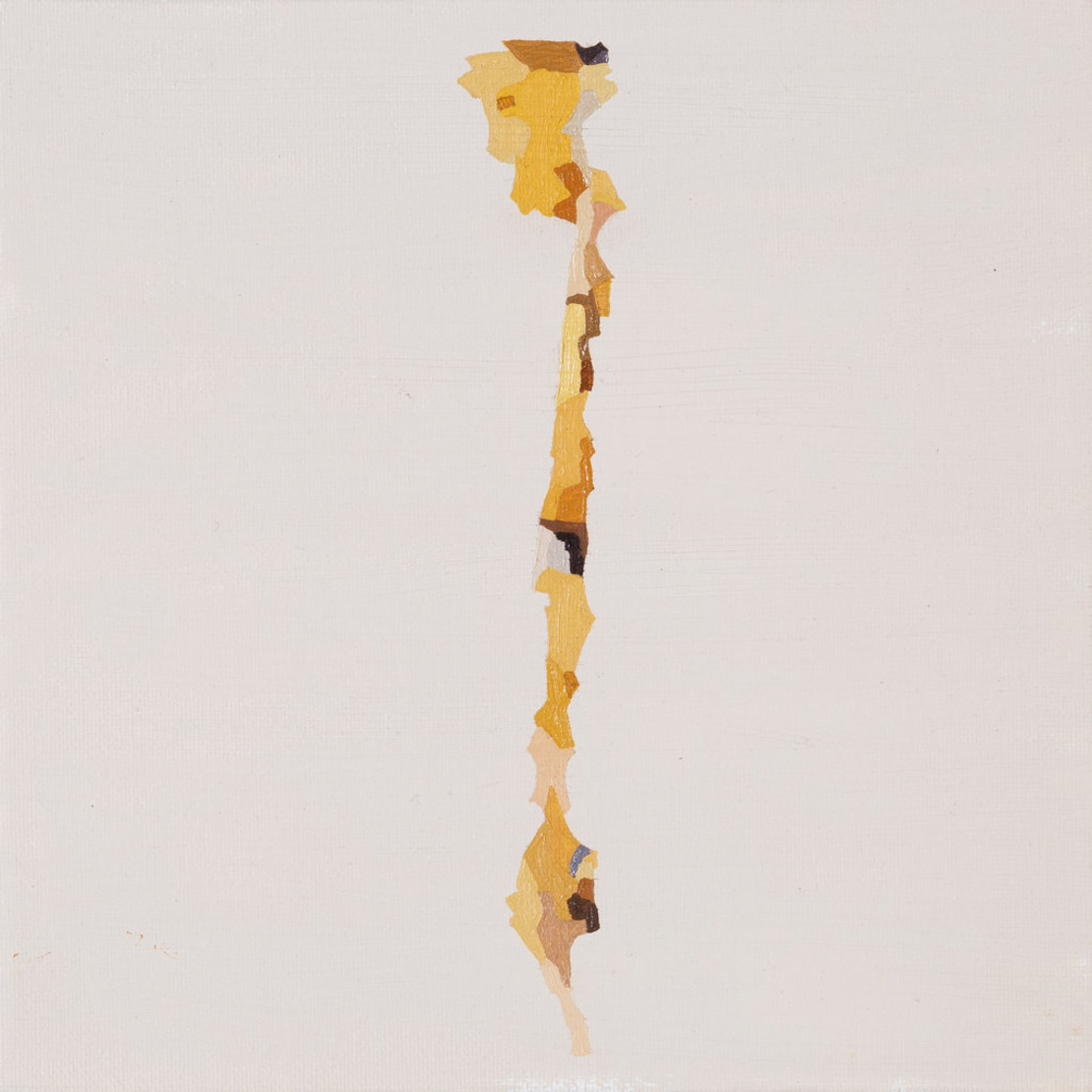